Get the best workout on the planet 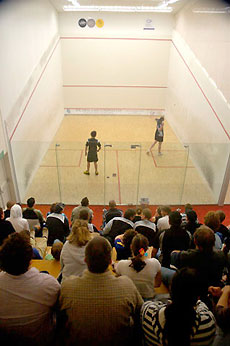 It's official: squash leaves tennis, cycling, running and rowing for dead when it comes to burning calories. And you never have to worry about the weather. To top it off, we have some of the best squash courts in all of Auckland.

How do I get started?

The first thing to do is show up at Club Night (each Thursday from 6.30pm) for some social squash with other Club members. A grading can be arranged from our Squash VP George Crosby if you want to compete in interlcub or tournaments. Contact George at squashVP@hernebayrackets.co.nz.

What's the story about interclub?

Once you've got a grading you're ready to play interclub, the home and away team's event played one night a week. Home teams always put on the after-match spread, so although it's competitive, interclub's fairly social too.

Can I bring a mate who's not a member?

Sure, as long as you play them outside peak hours (4pm - 8pm) and remember to pay the visitor's fee of $20 . After 3 visits you should probably start dropping a few hints about becoming a member too.

Fill in one of the visitor's fee envelopes outside the club office, stick in $20 for every 45 mins played, then leave it at the bar or slip it under the door of the Club office. Payment can be made by EFTPOS at the bar when open.

When's the best time to play?

You should be able to find a spare court most of the time. But the courts do get booked for tournaments, interclub and juniors. So check the notice board at the club as well as the calendar of events . Better still make a booking on the court booking system.

P.S. Here's the go with the lights

The squash lights are operated on a panel to the right of the Pro Shop. You'll need two members' swipe cards to turn them on during peak hours (4pm - 8pm). Off-peak, you only need one member's swipe card plus the swipe card on the chain to the left.

Is professional coaching really worth it? 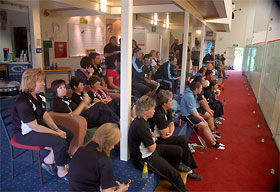 As with most sports, squash can be damn frustrating if you're constantly making unforced errors. Grab a few tips on technique, ring craft and more from our resident professionals, and chances are you'll enjoy your squash a whole lot more. Details below.

Our coach Priscilla Wildsmith has represented New Zealand in squash, she has played on the PSA circuit and is an A grade squash player who has won several National titles. She has been coaching for the last 10 years running group coaching and private lessons both in New Zealand and overseas. She will be available for Private lessons and Group trainings so if you are interested in improving your overall squash game in a social environment get together a group of friends and set up a group session with her. Group sessions are fun and will improve your fitness and skills dramatically.
(p) 0225191184

Our coach Jarrod van Driel has many programmes and opportunities on offer for all ages and levels of junior squash players. This includes programmes such as Afterschool Programmes, Junior Interclub Coaching, Fitness Programmes, Academy Programme, Individual Coaching Programmes, and many more.

For details on weekly, quarterly, and annual packagesclick  here.

This is a great starting point for both new and experienced players to ensure you can be confident of the rules.

All players competing in competitive play such as interclub and tournaments are expected to have completed and passed the exam.

The exam consists of 50 multi-choice questions and can be fully completed online through the Squash NZ website.  The Club Referee qualification is valid for two years from the time of completion.  Both players and non-players are able to complete the exam.

The reaction to the announcement that George Crosby was taking over as squash vice president was mixed. There was muted euphoria from those of us who knew and liked him on one side and a baffled ‘Why are you guys so pleased?’ from members who didn’t.

All court bookings are now displayed in our Online Squash Court Booking system. Please click on the link on the right hand side of this page to go to the bookings site.

Keep up to date with all the results here.