Squash Club Night resumes this week at 7pm and Tennis Club Night will run with "Drills & Thrills" starting at 6.30pm.

Happy Hour begins at 6pm and will run to 8pm. A BBQ will run later in the evening and a special thanks to James Dick who did a great job last week.

Chapel Darts - Around the Clock

Our first Darts competition will begin about 6.30pm tomorrow evening, with the Draw up later this afternoon. Thanks to those who have entered - we have 14 entries so there are a couple of spaces for late comers.  Bragging Rights - for 1st place & $45.00, 2nd = $ 25.00 & 3rd = $10.00. Players you will also have the opportunity to win a Chapel Voucher. 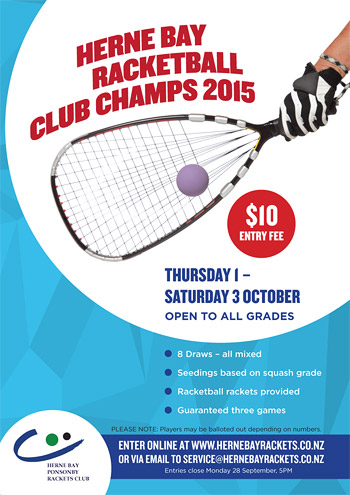 Last week we had our annual Squash clubs champs. There were decent B and C grade Men’s entries but we were a little light on all other divisions especially in the women’s. Hopefully we can improve on this in 2016. There was lots of rivalry and banter on and off the courts and a fun tournament was had by all.

Thanks for everyone who helped out especially to Angela Quirk, Sharyn Francis, Jacqui Mustard and Scott Kittelty.

Results as per below:

We had a great winter season in Squash with 5 of our 9 teams bringing home the pennant.

Congratulations to the below teams who all won the pennant for their Divisions:

With summer just around the corner join us for Defenders & Aggressors. Entries filling fast for Sunday 27th September 3pm to 6pm. Cost $20.00 - To enter contact David on 021476606

We will be trialling Junior Tennis Club Night on a Thursday beginning Term 4 (October 15th - December) as we have a number of Corporate & Private functions booked on Friday nights.

Useful Links to sports bodies and our sponsors