What's in our newsletter this week ...

* Adrian Kjellberg: Man of many parts

The club is now available for use but please be aware that due to damage by vandals it remains a hazardous area.

Please make sure you are wearing proper footwear in the club until the work has been completed.

Please also be extra vigilant about the security of the club and remember to double check that you have closed all doors and windows if you are the last to leave.

Adrian Kjellberg: Man of many parts

Peter Cross catches up with a sporting all rounder

The piece I’d planned to write about Adrian Kjellberg was sketched out in my head as I entered the club car park at 9:22 on Sunday the 30th December 2018. We’d arranged to combine a hit with an interview for this newsletter. It didn’t turn out that way: a young police officer in uniform from the waist upwards and civilian trousers and shoes was speaking to someone on his mobile. Then Rob Dick appeared and informed me the clubhouse had been vandalised overnight. And so it had: some thug had got in; spray painted a wavy line on the front wall of each squash court and the place reeked of kerosene. The stairs leading to the lounge were slippery and the newish upstairs carpet had been soaked with flammable liquid. Fortunately the person or persons involved hadn‘t put a match their handy work otherwise we’d be considering a re-build of our iconic clubhouse rather than an upgrade of the ladies and gents changing facilities.  But it was still a crime scene and as I have come to find out just one of a quartet of local buildings targeted in this way and luckily the only one that wasn’t set alight.

So Adrian and I moved to a cafe on Jervois Road and got a coffee.  I’ve known Adrian for a few years dating back to when he started coming to club nights, more often than not dragging along members from Henderson where he’s is still a member. I occasionally play for his masters’ team as I’m the go-to guy when the bottom of the barrel has already been scrapped.  They are a great bunch that includes a retired naval commander, a quantity surveyor, a co-owner of a successful website company and a surgeon.

If you’ve been following these mini masterpieces, you’ll know he’s the guy who showed me the ropes when I became a bar volunteer.

Adrian only took up squash six years ago when he was the grave side of forty. As a kid his mum dragged him along to Herne Bay before the present clubhouse and squash courts were built and he remembers it as a fairly child unfriendly environment then. At school soccer was more his thing. He could run so was put on the wing and, as often happens, spent long periods waiting for someone to pass the ball. He went to St Peters and recalls getting thrashed at table tennis by Chinese boys from Auckland Grammar next door. Sport took a back seat as he worked towards getting qualifications for university where he studied computer science, a field he’s been in since.

The decision to take up squash came about as he was looking for a sport he could do when it was dark or raining. The first two clubs he approached were not especially welcoming but Henderson threw open its doors and rolled out a red carpet. At the time their club nights not only had someone organising games but a nominated person who looked after newcomers. We spoke about the difference this simple innovation makes and it’s something I intend bringing up with Squash VP George Crosby. Adrian, who’s full of easily implementable ideas, suggested that we also ought to have a poster on the front door advising potential members who they could contact to find out about the club and how to join. Of course would-be members can Google us and get this information but it sends out a strong message that we offer tennis, squash and a gym and welcome new recruits.

I recall that Adrian telling me that he was into kitesurfing, one of those people you see dancing across the waves in places like Pt Chevalier and Orewa, but I had no idea he is also into waterskiing. Being totally ignorant about this activity I was keen to know more. I know that you see guys mounting a ramp and doing suicidal jumps sometimes but unless you’ve got a death wish once you’ve mastered your balance where else is there to go? It turns out quite a lot. For starters you generally only use one ski rather than two which enables you to zigzag and have more control. The ideal speed is 55 km/h which is quite a lick. Adrian also goes in for barefoot water skiing where your heel and back end of your feet are in direct contact with the water at over 60km/h, apparently it's ‘good fun.’ Some go one stage further, and ski upside down balancing on their hands. This doesn’t appeal to Adrian but waterskiing backwards is something he’s contemplating. 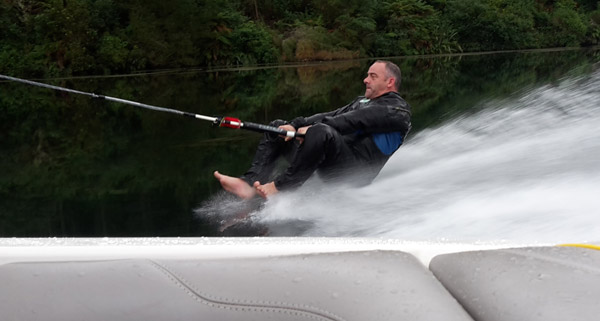 We touched on a number of topics that included the thorny subject of active club membership and the need for more people to get involved. Wherever he goes Adrian is one of those people who puts his hand up. You sense he can’t help it, his default response to a request is to say yes and as stated he is full of creative ways of improving things so he finds himself co-opted onto committees and gets made president, like the Kenley Waterski Club and Henderson Squash Club. And is often the natural choice when teams need a captain. It’s not about ego; for the most part these roles are far more graft than glory. It’s the little things, for instance he’s the person ringing and texting round to recruit guys for group coaching with Priscilla and, in my last game in his master’s team, his vehicle took us all to the venue.  He’s not alone and would be the first to single out others who also put themselves out but even still it’s an impressive trait.

What increasingly became apparent as we continued to chat is that my subject has virtually no ego. When he talks about himself it is only to illustrate a point that has nothing to do with him. For example it only emerged that he is a volunteer instructor at The Mt Albert Gymnastics Club, a gym club for youngsters that has been going for a hundred years. He thought this piece could be a good place to let our members know of this club and get ones with children to consider sending their kids there to give them a break from their Playstations.  As sometimes happens at clubs, the activity has been a catalyst for formal and informal socials and forging of relationships with people you’d never chance across otherwise.

In a wide ranging conversation the one subject we didn’t return to was the crime scene we had just left. Maybe it occurred to the pair of us that it could have been much, much worse. The thought of driving into the car park and being confronted by the smouldering, charred remains of our wonderful clubhouse is too painful to contemplate.

Any new members who want to play in the second half of the season (and we know there are a few of you!) please email Simon at tennisvp@hernebayrackets.co.nz this week. Teams we can add players to are Open Presidents 1 and 3 (mixed and doubles comp), Open Men's 1 and 5.

Good luck for second half of the season.

No excuses not to join us for some social and friendly match play on Thursday night from 6.30pm and/or Sunday afternoon from 1 to 3pm. New members welcome.

The turf repair on courts one and four have now been done and the tennis net replaced on court four. The turf patches will have more sand added over the next few weeks to help the surface settle. This will hopefully even out the pace between the sections - and the more they're played on the faster they will even out.

Below is the poster for the Women in Squash programme we are going to run starting this month.

Please forward to friends as the goal is to introduce women to squash and if they like it then maybe we might pick up some new members.

If you could confirm that you will participate that would be great. 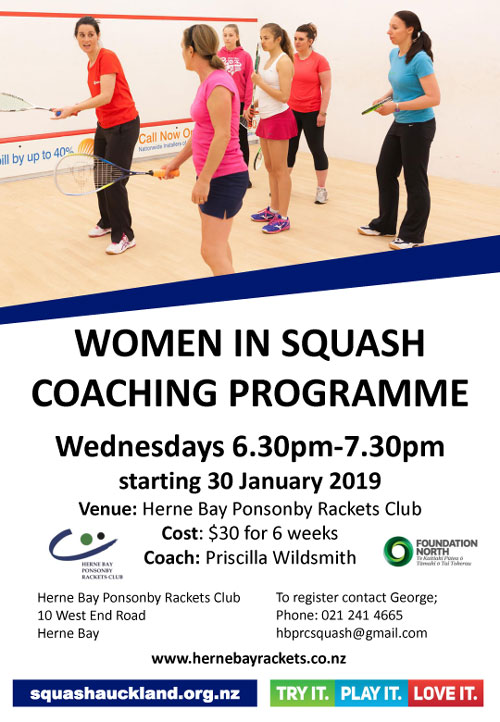 Senior club night starts at 6.30pm on Thursdays. Come along and meet fellow club members.  We rotate games every 10-15 minutes

Join Jarrod and his team on Friday nights from 4pm to 6pm for coaching, fun games and just a little bit of competition.

Pilates on the Court

Pilates classes are now being held again on Mondays and Wednesdays at 9.30am and Saturdays at 10am.

"Physical fitness is the first requisite of happiness”  Joseph Pilates

The club is a great facility for events such as birthdays and work functions which not only help fund the club from facility hireage but introduce possible new members to the club. To enquire about functions please contact Pia in the club office on 376 0681 or service@hernebayrackets.co.nz

Useful links to sports bodies and our sponsors

Pilates on the Court:   www.pilatesonthecourt.com